skip to main | skip to sidebar

I was recently asked by a friend about helping to dress up some models for table top gaming. Putting small electronic bits'n'bobs'n'batteries inside various objects is something I'm not unfamiliar with, but I hadn't attempted this particular operation before. 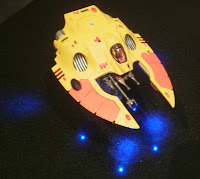 The models aren't truly tiny, so I could use 3mm diameter LEDs for the undercarriage lights, and 5 diameter mm ones for the engine lights. 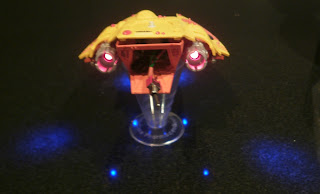 Overall, it think it turned out not too badly, although I haven't yet had any feedback as to how he went in the painting/decorating section yet. If nothing else, he should definitely be in the running for the "most liberal use of hot melt glue" category.
I've put a few more detailed pics below for those that care to get up close and personal. The top two are a little blurry as I turned off the flash to better show the LED's, but was too lazy to set up the tripod. The detail shots are all sharper. 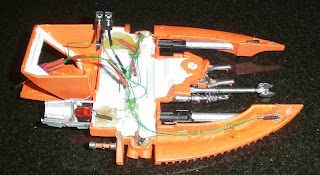 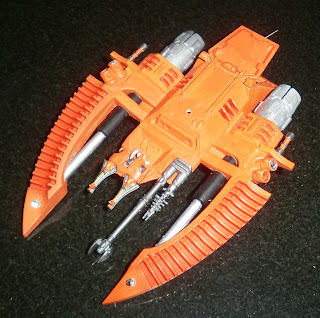 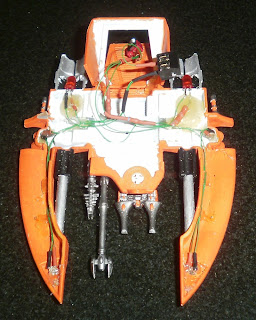 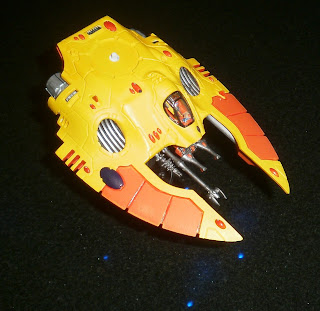 Not shown are the battery packs. I used a 6V battery a little thinner than a AAA and about a third the length (9.5 mm diameter by 15 mm). I used heat shrink hold on the leads to make it into a flying-lead version so as to connect to the mini terminal blocks, for a solder-less battery swap for the end user.
Posted by Unknown at 3:50 PM 1 comment:

This blog could use some tumbleweed graphics.

It was never intended to be prophetic reservoir of knowledge. More a place for me to stash stuffTM I don't have a home for elsewhere.